I take requests for these items rather than orders. When I get enough requests and have the free time, I'll make up a batch. The prices are high because they are hand made by me.  You'll need to contact me for approximate delivery times.

B or B-flat extension

I first saw one of these in Jon Landell's shop.  It had been made by Ed Almeida.  It's the sort of thing flute makers do with scrap silver and spare time.  It's also quite useful.  With a C foot, you give up low C, but gain low B.  Since B often goes to C#, this can be a lifesaver. With a B foot you lose the B and gain a low B-flat. There are some Mahler solos where this is the only way to go. NEWS FLASH!  Thanks to some gentle prodding from folks on the flute list (thanks Jim!) I actually have a few of these made up and ready to go.  The cost is $75 and I don't know when I'll make any more.

This aligns the French washer so that it goes on straight  making padding MUCH easier and more consistent.  I make them with whatever hardwood I have lying around.  If you want something special, just let me know.  Many of these gadgets get invented and reinvented, but Im fairly certain this one is original to me.  BTW, I dont believe in patenting this sort of thing.  If you want to make your own, let me know and Ill even give you the dimensions.  I would ask that if someone decides to produce them commercially, at least mention my name as the source of the idea. $80
Update - Ferree's is now producing two versions of this gadget - with my blessing.  They look nice, feel good in the hand and really work!  And, they're a lot cheaper from Ferree's! 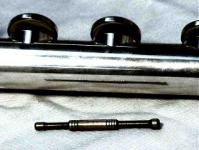 When you design the scale of a flute, the very first decision concerns key opening.  If you alter that dimension, you alter the scale.  My gauges are made to either Alberts Cooper's or William Bennett's dimensions.  The small end is for the F key and the large end is for the footjoint.  The effect of altering the key height is counterintuitive.  Any change you make will affect the left hand notes more, so raising key height sharpens the left hand most, effectively moves the toneholes apart and in the end LOWERS the pitch of the flute.  This is why many old scale flutes work well with the keys set low.  It flattens the left hand more than the right hand and foot, in effect raising the pitch of the instrument. $20

I think I invented this, but its such a good idea that someone else may have gotten there first.  I can say that in about 1975, I modified a jewelers staking tool (its used in clock repair) to punch pins out of flutes. The photo above shows the original item on the left and my "improved version" on the right.. The ones I now make are from steel and allow better access in awkward places.  Theyre completely hand made and very expensive.  Unless youre really rabid about these things, Id recommend getting one from Ferrees, JL Smith, or Jonathon Landell.  $300 Many piccolos are made with a sharp middle D and flat low D.  Its s simple matter to extend the end of the piccolo a bit and bring the middle D in tune.  Of course this really flattens the low D, but life is full of compromises.  You can do this yourself with a bit of cork, or you can pay me to make an elegant little piece of plastic that slips into the end of the piccolo.  This should cost about a dollar, but unfortunately all piccolos are different.  It has to be custom machined for fit and pitch:  $60

I make these for two reasons. The first is personal safety. Dont use a conventional cleaning rod on a stuck cork! When the cork finally slips, the end of the head tube can do a nasty number on your fingers. The second is the necessity for accurately  locating the cork. A few years back, I nearly flunked out a talented graduate student for playing out of tune. I repeatedly asked about the cork position and was assured that all was well. I finally got suspicious and checked the very expensive, hand turned rosewood cleaning rod. It was off by about three millimeters. We moved the cork to the correct position and averted two nervous breakdowns! If you look closely, this rod has two marks  one for flute and the other for piccolo. Also, theres a hole in the end that swallows the cork screw and protects it from trauma.  $65